Whenever I go on holiday, I decide that I really ought to know more about politics, architecture and economics. Visiting a foreign country must be such a rich experience if you can look at the buildings with an expert eye and come to intelligent conclusions about how they reflect the society that built them, or if you can read the business sections of the local newspapers and make sound judgements about the direction in which the country’s heading. Feeling slightly clueless in relatively familiar places like France and Spain is one thing, but trying to connect the disparate dots with which one is presented in India is quite another. The Divine L and I have now been here for over a week and we’ve got so many questions to which we don’t seem to be able to find answers.

Judging the whole of India on what one sees in Mumbai is probably as foolish as judging the whole of Britain on what one sees in London, so I’m trying to be careful not to form too many generalisations in my head… but so much really does seem to have changed since my last visit 6 years ago… although that trip was mainly to Rajasthan, which means I’ve got to be even more measured with my personal observations, because I’m not necessarily comparing like with like…

But here’s one question we’ve been asking ourselves: where have all the beggars gone? Last time, it was almost impossible to walk along a tourist area without being surrounded by a small horde of skinny, wide-eyed children tugging at your sleeve, trying to persuade you to part with a few rupees. Here in Mumbai, that hasn’t happened once. Of course, I am by no means complaining about this, although I do wonder where they’ve all gone. Have they somehow been caught up in the rapid expansion of the middle class or have they been obliged to move elsewhere? I’ve asked a few local residents, and they don’t seem to know the answer either, although they do acknowledge that several parts of town that, a few years ago, would have been used as shelter by street dwellers are now almost completely empty. And I’d also be interested to learn about the effects on the economy of the arrival of countless ‘western’ brands. Everywhere you turn, there’s a Nike or a Swarovski or a Benetton. At the moment, one can also find plenty of independent, Indian-owned shops, but how long will that last? In the long run, will consumers enable the retail market to maintain that fine balance between supporting local businesses and welcoming foreign endeavours, or will the big boys win?

Later this week, we’re hoping to visit a Mother Theresa orphanage, and I expect that’ll raise even more questions, but then the best holidays are the ones that make you realise the world is much larger and much more unfathomable than you ever suspected. 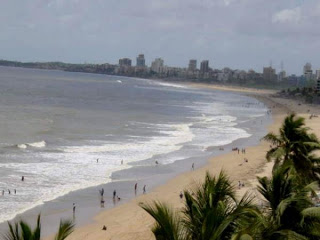