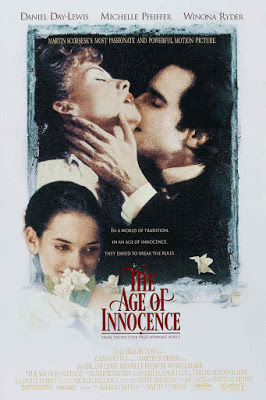 When you’ve watched a movie several times, you enter into a wonderful sort of relationship with it: its main beats and incidents become so familiar to you that you can almost push them into the background and focus on aspects you may not have considered before. In my most recent viewing of Martin Scorsese’s masterful adaptation of Edith Wharton’s The Age Of Innocence, I was struck by the silences. Much has been written – and rightly so – about the oppressively lush interiors, the body-limiting costumes, Elmer Bernstein’s layered score. They all play their part in the tale of Newland Archer – a wealthy, late-nineteenth century New York socialite (played by a never-better Daniel Day-Lewis) whose stable existence is shaken up by the arrival of the scandalous Madame Olenska from Europe (in the guise of a luminous Michelle Pfeiffer). But Scorsese always knows when to tone things down. And it’s the quiet moments that give this movie much of its power. Meaningful half-glances. Words swallowed up before they’re uttered. Pauses lingering in drawing rooms, a little too long for comfort. They’re just as insidious and corrosive as the more obvious snares the characters use to manipulate and entrap each other. So yes, to be sure, the film remains a dazzling spectacle, twenty-six years after its release. But it’s also a compelling study in the devastating impact that can be achieved by saying nothing at all.
Dariush
For my olfactory take on the movie, please click here.